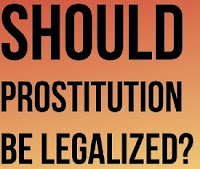 In the martial arts, the student is sometimes encouraged to employ his or her opponent's force in order to exit victorious. Sometimes battling against something is a sure means of encouraging it. And it is in this spirit that I wonder if it is not time for the United States to legalize prostitution.

The impetus for this thought-possibility arose this morning when I read the story of a Harvard professor who had been placed on administrative leave after his alleged sexual advances in the past gained a traction in the present. The professor is just the latest in the Rolodex of alleged offenders who jostle in the news and stretch from religion (Catholic, Protestant, Jewish, Buddhist, Hindu ... take your pick) to Hollywood to doctors' offices to business firms to ... to seemingly everywhere.

The drum beat goes on and on. Power-fucking is decried, but that doesn't mean it stops. One after another, from the U.S. president on down, sexual blackmail, if that's what it is, gets a negative nod of the head. No doubt about it -- people have been hurt.

Now what? The latter-day laundry list goes on and on and on: Politicians and other public figures resign rather than face the imputations and accusations. What their spouses or significant-others think or feel is seldom revealed. It's a no-no: Nuff said. The topic threatens to become as numbing and boring as the pain it has engendered. Any fun aspects of the activities are carefully omitted. Hurtful stuff takes the limelight and perhaps rightfully so.

But consider the opening salvo of Wikipedia's answer to the question, "Was there ever a culture that did not include prostitution?"

Naturally, there is much to be said about the oldest profession, but battling against it does not seem to be particularly effective. But perhaps one of the least effective modes of attack is the notion that sexual intercourse -- from fucking to fun -- is or could be out of bounds. It is minds that shape this template and the question is whether those minds might be wrapped too tight for the limitless possibilities of human life.

In this context, I wonder if giving every man or woman a card (or stack of them) that s/he might hand to a would-be harasser. On the card would be the address of the nearest available house of prostitution. Such cards would act as concrete versions of the word "no" or words, "no thanks."

This scenario does not address the whiz-bang matter of wielding power, I concede. But it has a concreteness that seems sensible from at least the sexual and/or real-life point of view. As Stephen Becker once put it approximately in his novel, "The Chinese Bandit," "whores do well for money what others do poorly for free." Such a card, when handed to the alleged harasser, might act as a buffer against unwanted advances. It says, in less confrontational terms, "everyone likes sex. Why don't you try this, because I am here about a job, not a sexual encounter."

I haven't got the wrinkles (sex slavery et al) ironed out of this idea, but if prostitution were simply legalized, how much less corrosive and harmful might a culture of harassment become? History suggests prostitution is here to stay so ... maybe the pecker-power politicians might find a source of taxable income in The House of the Drifting Clouds or whatever. And I see no reason why what is sauce for the goose needs to be withheld from the gander ... male prostitution might also provide a less (err) rigid standard of disapprobation here in the prurient and patriotic U.S. of A.
Posted by genkaku at 10:57 AM