CAIRO (AP) — The latest breakdown in talks with Ethiopia over its construction of a massive upstream Nile dam has left Egypt with dwindling options as it seeks to protect the main source of freshwater for its large and growing population.
Talks collapsed earlier this month over the construction of the $5 billion Grand Ethiopian Renaissance Dam, which is around 70% complete and promises to provide much-needed electricity to Ethiopia’s 100 million people....
The Nile supplies more than 90% of Egypt’s freshwater. Egyptians already have one of the lowest per capita shares of water in the world, at around 570 cubic meters per year, compared to a global average of 1,000. Ethiopians however have an average of 125 cubic meters per year.

A 120-year-old lighthouse has been put on wheels and rails to move it away from the North Sea, which has been eroding the coastline of north-western Denmark.
When the 23-metre (75ft) Rubjerg Knude lighthouse was first lit in 1900, it was roughly 200 metres from the coast; now it is about only six. 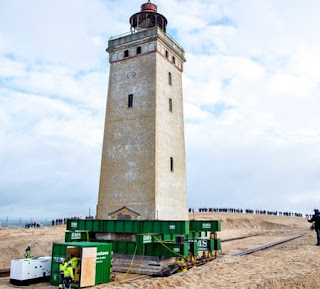 Call me an alarmist, but I hope my son's pistol is somewhere around this house.