.
Maybe it's a bit peculiar, if true:

Did you ever notice, in whatever gross or subtle ways, that there is a longing to be the focus of attention, the star, the alpha (fe)male, the capo di tutti capi, the saint, the most sought-after, the beautiful, the hero or heroine, the head-turner, the life of the party, the much-loved, the winner, the sine qua non, the ... well, you get the idea: The top of the heap?

All you have to do is stand in the supermarket check-out line to find an example: Young women with bulging boobs and capped teeth stare out from magazines on the rack; 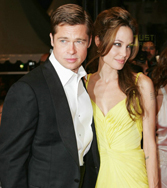 assured young men, often with spikey hair and three days worth of beard suggest that here is a dream worth living. And people buy the magazines ... who doesn't want to be the star, no matter how much they may look down on the crass world of Hollywood ... and isn't finding Hollywood crass or ignoble just another way of asserting stardom, wisdom, achievement, certainty, nobility ... a slickly-revised version of Hollywood?

Well, little or large, gross or subtle, I just figure it's par for the human course ... people work pretty hard to be a star, of whatever twinkling variety.

And if it's just par for the course, then I think we can relax. This is like having five fingers on your right hand. It's just true. It's no biggie but it is worth acknowledging.

A woman in her 40's I once knew summed things up nicely when she said, in response to a light-hearted what-do-you-want-to-be-when-you-grow-up question, "I want to be a rich ... sexy ... saint!"

OK ... so maybe it's just true and maybe there is the courage to acknowledge it. So far so good.

But did you ever notice that if it is pointed out to our star-gazing, center-stage dreams and hopes that they already are center-stage, they already are saints ... the first thing they do is fidget and demur: No, no, no ... I don't have enough money or sex appeal or power or holiness to be the star. I don't look like the cover on the magazines in the supermarket. I'm not as smart or serene or unconcerned. I'm no Buddha ... Buddhas are way kooler than I am. And they can give you a hundred reasoned and reasonable examples for this point of view. Basically, the idea scares the shit out of them, I think.

Martin Luther King once pointed out what I think is a fact: What's wrong with the world (and by extension, what's wrong with me) is not what worries people so much; what really worries them is that things are all right. A truly frightening prospect ... gut-level scary. And it's no good just saying so. What's scary is the prospect of knowing so.

But look at the up side: If you acknowledged what was right in front of your nose ... think how much money you'd save on supermarket magazines and other holy texts. :)
.
Posted by genkaku at 6:19 AM