Funny -- I just tried to look up the word "bitchslap," a wonderful and utterly clear descriptive in my mind, and found that, as far as the Internet is concerned, there may be examples, but there are no definitions. It was, in itself, something of a bitchslap.

A bitchslap, whether literal or metaphorical, is a slap in the face that bluntly states the obvious. All of the presumptions and assumptions previously held are thrown into a cocked hat. In an instant, what was "right" becomes "wrong." It is as if someone had been looking "east" with assurance and faith ... only to find, in a blinding moment, that s/he had been looking "west" the whole time. It is a get-real epiphany ... and not always very pleasant.

It is easy to be sanguine and caring about the bitchslaps anyone else endures ("I feel your pain," "I empathize"), but things are far less convivial and compassionate when the sting is personal. No one likes getting slapped upside of the head, but without the bitchslaps that life can deliver ... wouldn't that reduce a person to abject idiocy?

One day, a lot of years ago, I was walking along west 34th Street in New York City. The street was full of sales and merchandizing and hustle and bustle. Stores sold things like imitation Chinese furniture and knock-off designer purses and wrist watches. It was an atmosphere of pulsing activity ... a world scratching its way upward and willing to cut corners in order to get there. Anyway, I was threading my way through passing pedestrians when I came upon a small crowd surrounding a man with an up-turned cardboard box that served him as a table. On the table were three cards -- two similar, one different -- which the man would reposition with a wonderful dexterity. Onlookers were invited to wager that they could pick out the one dissimilar card after being shown the card that was then placed face down among its two brothers. The game is called Three Card Monte.

I was the perfect sucker.

At the time in my life when all this was going on, I was a Zen student. It was probably fair to say I was an enthusiastic Zen student, chock-a-block with lore and legend and the effort that goes with an attentive focus. I hoped to clarify (and, more secretly, escape) the uncertainties of my life. I wanted to straighten things out and get things right and Zen practice was my tool of choice. And so, as I watched the man manipulating the cards, I felt that I was coming from the perfect vantage point, a perspective that would assure me some free money. Could I guess the right card and gain more money than I wagered? Of course I could.

I laid down $5 and won ... just as intended. Woo-hoo, I was up five bucks! But then the man encouraged me further. Would I be willing to wager, say, $40? That was too rich for my blood -- I was not exactly rolling in dough at the time -- but we finally agreed that I could wager $20. My confidence was good enough for $20, even if losing it (it wasn't going to happen, of course) would be a sharp blow to my economic well-being.

It was a bitchslap that rocked my world. How could that happen?! I had followed the cards with the same attentiveness I had a few minutes earlier. I was a Zen student. Attention was my business ... and I lost. It really shook me and not just because of the money I could not really afford to lose. All of my confidence and trust and well-anointed assumptions and imagined abilities were shattered in an instant. How could that be?! It was nasty and wrong and somehow unfair!

Three Card Monte, for those unfamiliar, is called a scam because it is a scam. The dealer manipulates the cards at a pivotal moment and the patsy is relieved of his money. I didn't know that at the time, but even if I had, I suspect that my own assumptions and beliefs might have drawn me forward. Others might get suckered and bruised, but moi? No way, Jose! I was in control.

Only of course no-way-Jose became a very tangible yes-way-Jose. I was most-emphatically not in control.

Some dumb rube losing a few bucks to a street shyster is one of those events anyone might view with a self-satisfied sympathy or a smug snicker ... what an asshole! I'd never be that stupid! I understand things and am in control. I've worked pretty hard to fortify my defenses against the pain and confusion that bitchslapping implies. Nobody's gonna bitchslap me!

But of course it's not true. Or rather, if it is true, if the defenses against life's bitchslapping actually worked, what sort of human being would that create? Talk about a nitwit!

Is there any activity or sense of certainty that is not cruisin' for the bruisin' of a bitchslap? 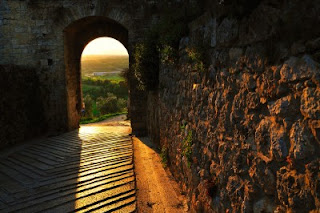 Whatever the boundless wonder or grinding horror, still a bitchslap positively invites a revised view, sometimes painful, sometimes joyful. And just because it is tentatively called a "bitchslap" does not mean that the results are not earth-shaking or even earth-shattering.

No one wants to get bitchslapped and yet I think it's true ... it is the bitchslaps of life that really heap blessings on the recipients. These are the times that are seen in retrospect as having offered the best possible teachings. The times when I was right were pleasant, but the times when I was wrong -- sometimes searingly, scorchingly wrong -- well, isn't there more honest meat on that bone?

I am not suggesting that anyone take up an easy-peasy suspicion and pessimism in life. That too would be deserving of a bitchslap. But I am suggesting that the epiphanies associated with bitchslaps point back to the assumptions and convictions, the beliefs and hopes of the one who held them. Who is this one and how often does s/he have to be slapped upside of the head before the dime drops. Being in control is like being out of control ... bitchslap! A jaundiced outlook is not so different from a rosy one ... bitchslap! If no one likes getting bitchslapped, the question arises as to who provided the conditions in which bitchslapping became so common.

As Leonard Cohen wrote, "There is a crack in everything. That's how the light gets in.”