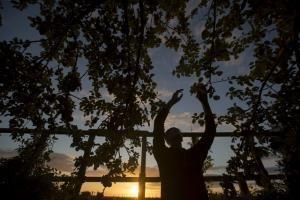 Like any good hermit Rachel Denton rises early in the morning to tend to her vegetable garden, feed her chickens, and pray.
But the former British nun, who has pledged to live the rest of her life in solitude, has another routine that sets her apart from her society-shunning brethren - she has to update her Twitter account and check Facebook.
Unlike other hermits, such as a man discovered in 2013 living in a wood in the United States having spent 27 years without any human contact, Denton has embraced the Internet age.

The Reuters sketch of Denton seems somehow to stretch the boundaries of what a "hermit" might be, but then what wouldn't stretch those boundaries? Denton's explanation seems as good as any: