.
As when a blizzard strikes New York, changed circumstances in the newspaper office seem to have nourished a changed populace. There is a warmth and kinship for some, as if, like New York, "we're all in this mess together." More smiles. More concern one for the next.

But one man's delight is another man's disaster and the same circumstances have also brought out an invigorated bitterness at the cruel fates that have visited this disaster on 'me.'

Specifically, the impending departure of a number of staff members, me among them, means that what had been too much work will now become even more work for those who will remain as the newspaper dwindles like a sunset ... it is almost night, but not quite yet. What was the light and vigor of news-gathering is remembered in that dimming light, but now it is the dimming, not the vigor, that is in play.

Last night, Mike, a taciturn Brit who sits across from me and like me is inclined to work when there is copy editing to do, came by my desk and the two of us had a nice chat about the fact that he had caught a story in which a World War II vet had asked a class of Yeshiva students how many had heard of World War II. Not one person raised a hand -- a fact that both Mike and I found astounding and dubious. But since the reporter who did the story knows how to write English and, more, knows how to think, the two of us also tended to credit the scenario.

And from that point forward, Mike, who will leave the office on Saturday, and I, who will leave at the end of June, just let things ramble like a couple of old hens. It was not something we would have done in the office in the past ... not because we weren't capable of doing it, but because both of us were geared towards work and getting it done. Now, as both of us prepared to leave a profession we had once loved, the changed circumstances meant our work was no longer necessary: The blizzard had struck and we were thrown back on whatever kindness and decency we possessed. The imperative of work and the willingness to take it seriously were hissing away like a slow leak in a tire. We might feel sad or confused, but we could also extend a simple humanity to each other. It was quite pleasant ... and in a strange way, more sensible by half.

But later in the evening, I asked Barry, a guy with whom I share duties on the wire desk, if he were going on vacation. My schedule showed that I had the wire job for the rest of the week, whereas in the past, he was the usual wire editor and I would fill in for two days when he was off. An intense bitterness clouded his face as he told me that no, he was not going on vacation: He was scheduled to learn "more important things" -- meaning that he would receive training that would allow him, in future, to do the work of another man who is scheduled to leave. It was not work Barry wanted to learn. The implications were that the job he had done for so long and had found meaning in could be sacrificed to a less-satisfying and 'dumber' layout job in the sports department. He was pissed and confused as the blizzard's impact was felt. Barry will stay on after others leave ... and the implications are not pleasant. 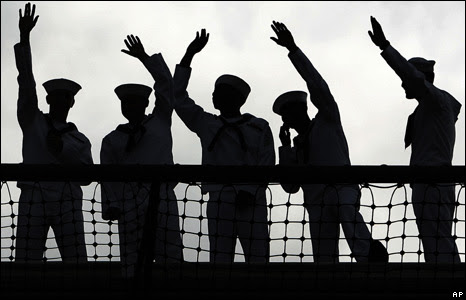 Bit by bit the simple truths assert themselves and the contrived and well-woven imaginings evaporate. A smile, a bit of nattering, a yowling sense of loss ... it's not as if any of this had ever been missing or as if there could be some well-coiffed effort to make the truths 'more' true ... snow is just snow, after all.