.
Dennis, a fellow who has taken an interest in Zen Buddhism, dropped me a note early this morning, saying he was on an unexpected trip in Vermont. Earlier in the week, he said he would come to sit on Sunday. It is the second time he said he would come and then didn't. But the first time, he didn't drop me a note, so I have to think that he is moving forward with his honest Zen practice: Taking responsibility for the various aspects of life -- whether doing or not doing -- can be pretty tough.

From my perspective, it's something of a relief. I will go out to the zendo and sit. That's enough. No need for discussion. 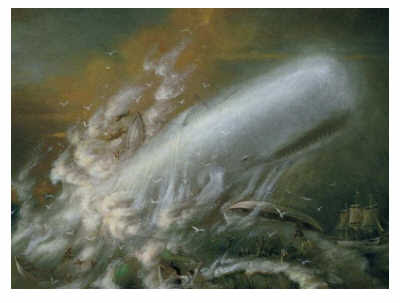 In the news, underwater explorers discovered the sunken ship of the captain who inspired Herman Melville's "Moby Dick," a viscous tome about an obsessed captain in search of a white whale. It was Capt. George Pollard's second whaling command. It was during Pollard's first that his ship was rammed and sunk by a whale ... and inspired Melville. During that earlier adventure in 1821, he and his men had drifted for three months and resorted to cannibalism before being rescued.

Uncovering the facts that nourished the myth ... sailing back in history to discover the artifacts that lend substance to a current tale ... back and back and back ... stripping away the glamor and poesie and symbolism until things become plain as salt. It was, after all, just a man, just a ship, just a search for sustenance and wealth. As plain as salt -- sailing back into our own lives, our own myths, our own wonders and horrors until we've assembled ALL of the facts, ALL of the artifacts, until, guess what -- it's still as mysterious and inexplicable as salt. Can salt be explained or made more credible in our investigative efforts? I doubt it.

Take a taste and you've solved the puzzle ...