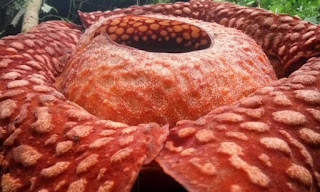 The largest single flower ever recorded was found recently in Sumatra, Indonesia, measuring a reported 111cm (3.64ft) across....
... this giant flower is critically endangered as its forests disappear, and it remains impossible to cultivate. If Rafflesia was a giant animal, like an elephant or blue whale, there would be international efforts to conserve it, but instead it remains largely ignored.
Posted by genkaku at 6:33 AM