.
When my daughter, Olivia, was little, I would sometimes read her a book called "Big Sarah's Little Boots." Why that book should reassert itself in my mind today, I have no clue, but today I thought of "Big Sarah's Little Boots" and how much like the Tripitaka or the Vedas or, for all I know, the Bible and Torah and other spiritual texts might be. 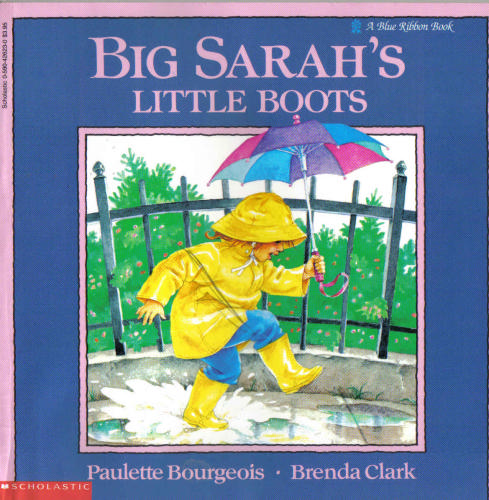 "Big Sarah's Little Boots" is a story about a little girl who loves her yellow rain boots. She loves them the way all children love items that complete or enhance their lives. As a kid, I was a cap pistol guy myself. But I could sympathize with Sarah. Sarah's boots are kool. They are pretty. They perfect Sarah's life. They are plainly delicious. They are a sustaining icon of the importance and fitness of Sarah's existence. Sarah's boots made Sarah bigger and better.

Sarah's story hinges on the fact that one day Sarah notices that her boots no longer fit. She spends a lot of time being convinced that they have shrunk and then trying to stretch them back to their original, comfortable and comforting fit. Naturally, it doesn't work because the fact is not that the boots have shrunk ... the fact is that Sarah has grown. Sarah's mom eventually takes her to the store to get new boots. Sarah doesn't like the new boots at first, but by the end is willing to pass along her yellow boots to her brother ... and to splash around in her new and improved boots.

Is there a spiritual persuasion in the world that does not fit this mold? -- so kool, so warming, so enhancing, so reassuring, so helpful, so ... so perfect?! The deliciousness of explanation and belief and effort and discipline may not be dressed in the clothing of a children's story -- the deliciousness, after all, seems to require a solemnity, if not seriousness. It fits, it feels good, it goes with the wearer anywhere and everywhere. Wonderful yellow boots.

And yet, whether cleric or monk, house wife or plumber, philosopher or theologian ... one day the yellow boots don't fit so well. Like Sarah, there may be a mad scrambling to stretch the old boots ... write ever longer and more subtle explanations of how and why the old boots really do fit the new feet. So much love and effort and enjoyment and reliance and gratitude have been invested in the old boots that the notion of surrendering them is ... well, for the moment, it's unthinkable.

But growing up has a way of asserting itself. As 1960's music icon and Beatle John Lennon observed, "Life is what happens to you while you were busy making other plans."

It's not somehow bad or naughty or foolish to latch onto the yellow boots of life. It just seems to be what happens. And in the same way, outgrowing yellow boots seems to be a part of any healthy lifestyle. The initial lurch of recognition that old boots simply do not fit laps against the sand castles of the past. Libraries fill up and temples rise as the latter-day Sarahs attempt to stretch old materials to fit newly nourished bodies.  It can be quite a tussle. But in the end, without rancor, the question has to be asked:

What's the matter with going barefoot?
.
Posted by genkaku at 8:51 AM