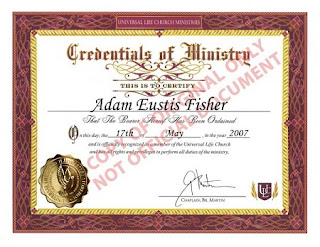 And, in another nod to the epidemic of coronavirus19 and the business acumen it has encouraged, this blast from the past showed up in email today:

Greetings Rev. Adam Eustis Fisher,
Another year, another cheer! That's right, it's now been 13 years since you became an ordained minister! We can't believe it either. Time really does fly when you are having fun, doesn't it? It's been a while since we've been in touch, and we just wanted to check in and see how things are going. Have you been taking full advantage of your status as a legally ordained minister?

2007 was a time when a Zen student who used to come here wanted me to marry him and his sweetie and I needed some status in order to do it. So I sent away for an insta-minister certification. It took about five minutes and voila! Now, of course, they're wondering if I have the full regalia that matched the status ... dingle-dangles of brocade and the like.

How 'bout that for a hoot.