.
Last night, as I was putting away my hat and cup prior to leaving the office, Al began to tell me about his daughter, a woman of 35 who had completed Yale Divinity School and was off to Berkeley for more religious training. "She's trying to find herself," Al commented.

The conversational situation left me somehow flabbergasted. I have known Al as an old-time sports editor, a man with cancer that needs periodic treatment, a man who goes skiing and enjoys Cape Cod fishing, and a guy who, like me, will leave the newspaper behind come next Saturday.

But I have always known Al as a guy who plays his cards close to his chest ... giving out bits of what sound like personal information without really opening up, a guy with what are sometimes called "social skills," a guy, like a lot of others, who keeps his secrets and thus asserts his control.

Somehow, talking about his daughter and opening a window on 'religion' represented a sea change ... or maybe it just showed how wrong my perspective could be. Between the lines, I heard Al saying that his daughter was someone/something he cared about deeply ... and religion was something he had held at a controllable distance but now, perhaps, wondered about. Knowing who played third base in 1987 might suffice under ordinary circumstances, controlled circumstances, but now, somehow, the control was slipping away.

Of course, I could have been making it all up, but I found something extremely touching in it. There was something wan and defeated in Al's face, as if, having held his cards close to his chest for so long, he was forced to lay them down ... and who the hell would he be without the cards he had held so close to his chest? How could he win if there were no longer any cards to win with?

And I wanted to help, to lend a hand, to ease what I perceived as a sense of loss and confusion. But wanting to help left me somehow confused as well. I was incapable of helping. It simply could not be done. Yes, I chattered a little bit about religion and trying to find ourselves ... I made sympathetic and what I hoped would be helpful noises. But the facts were implacable. I could not solve or salve the difficulty of another. And yet the longing to help -- to be the socially-credible altruist -- badgered and insisted.

In the end, as I walked out the door, I thought I would bring Al a copy of my book and suggest his daughter might like it ... or not ... in which case, it was a freebie and she could throw it in the waste basket. Whether anyone reads the book or thinks well or poorly of me was not the point. It was just what I could think of.

The thought was, I realized, my way of 'solving' my own confusion, of asserting my own sense of separation and control -- cards held close to the chest with something called altruism or kindness. But it lacked something, those cards I was holding. 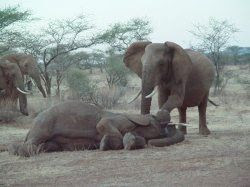 The elephant will run its trunk or foot, ever so gently, across the brow or flank of a suffering or dying or dead comrade. Or the ape will stroke with tenderness some fallen friend. There is nothing extra in it. It has nothing to do with someone or something else. It is just what apes and elephants do. Apes and elephants hold no cards. Their 'kindnesses' have nothing to do with kindness. Who they are is not limited by who they are...or who anyone else might be.

Isn't it enough to be who you are, to lay down the much-worn cards and just breathe?