Why/how do such mass die-offs occur. Climate change is a suspected, but as yet not-irrefutably-proved, villain. 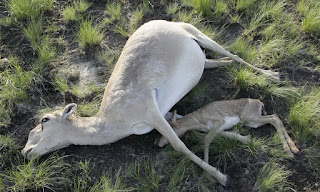 There was almost something biblical about the scene of devastation that lay before Richard Kock as he stood in the wilderness of the Kazakhstan steppe. Dotted across the grassy plain, as far as the eye could see, were the corpses of thousands upon thousands of saiga antelopes. All appeared to have fallen where they were feeding.
Some were mothers that had travelled to this remote wilderness for the annual calving season, while others were their offspring, just a few days old. Each had died in just a few hours from blood poisoning. In the 30C heat of a May day, the air around each of the rotting hulks was thick with flies.
The same grisly story has been replayed throughout Kazakhstan. In this springtime massacre, an estimated 200,000 critically endangered saiga – around 60% of the world’s population – died.