On his death bed, one of the nicest people I have ever known, Ab Hachadourian, was reported to have been sorrowful about the many things he had not done in his life. But when a friend pointed out to him that he had flown fighter jets, worked as a newspaper editor and helped to raise two fine daughters (all things that Ab loved), his face and demeanor relaxed. Yes, indeed! 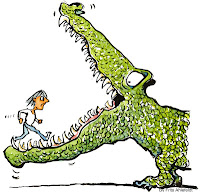 The Zen teacher Rinzai, on several occasions, upbraided the monks he was instructing, saying, in one way or another, "Your whole problem is that you do not trust yourselves enough."

Perhaps the most instructive aspect of aging is nothing more than the recognition that much of the past has been prosecuted with a misplaced confidence. And it's not as if such a recognition could be espoused intellectually and thus provide some protection against the sense of loss. Rather, the great or long-lasting efforts of anyone's life seem to tell the tale all on their own ... like Ab, anyone might have done more, attained more, and the richness and meaning of what has been done seems to lose its lustered footing.

At first, this can be pretty depressing. Days and weeks and months and years devoted openly or covertly to employment or marriage or spiritual practice or automobile repair or activism or teaching or making war or hiking or getting smarter or ... whatever-ing ... and whatever it was carried with it a confidence of love or distaste or assured meaning and belief. And then, increment by increment, the air seemed to go out of the balloon, not necessarily because of the death threats that spiritual persuasions are wont to flaunt, but because ... because ... because, well, that's the way things seem to work.

And a sorrow or cynicism can kick in: All that time, all that energy, all that effort and focus and correction and confidence .... It's not as if the time spent were exactly wrong, it's just that somehow the right-ness seems to lose its oomph and there is a sense that the pooch has been royally screwed.

Misplaced confidence. Something is out of whack, but what it is or was can be hard to pin down. What had been reliable and comforting -- whether flying fighter jets or raising two fine daughters -- was OK ... but it was no longer convincing; it had become mediocre and stale and blurry in import. It feels wrong but the ability to conjure up what is right lies just out of reach.

A time of sorrow and perhaps panic. All efforts to reassert what no longer has the oomph of yore seem to compound the sorrow ... or engender a desperate fanaticism. When sorrow of this sort comes knocking, I think it is best to open the door. Cuss and weep and wish if necessary, but open the door. Open the door with a new-found confidence.

"You don't trust yourselves enough."

The trust of the past, the confidence attained in flying fighter jets or raising two fine daughters or doggedly pursuing some spiritual endeavor -- yes, it would be lovely to feel that assurance again, but now a new confidence is required. The misplaced confidence of the past was placed in others, in the social order, in comely agreements, in success and failure ... I am who I am because you say so and I love agreeing with you. There is no escape, but now it is time to escape.

The Rev. Martin Luther King, Jr., once said, "It is not what's wrong with the world that scares people. What really scares them is that everything is all right." Socially or in the deepest reaches of the individual heart, I think this is true. Never mind wrapping it in some misplaced, flag-waving confidence in "God" -- it's just true.

Misplaced confidence has the distinct advantage (with luck) of inspiring a less-embroidered assurance, something that does not shake and quake and scramble and assert. There may be a sorrowful swamp to cross, but still ... it's easier when anyone trusts a little more and insists a little less.

What is is confident ... just like you ... impossible to misplace.