the rise(?) in whining 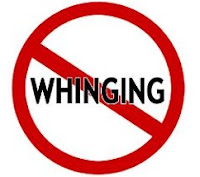 It was only 40 or 50 years after the fact that I learned I had broken my nose as a kid. The nose doctor who informed me of this fact -- a guy I was seeing on another nose-related matter -- was quite insistent and quite assured.

I ravaged my memory of any such event and came up empty. Was it possible to break your nose and not know it? It struck me as unlikely, but the doctor seemed to want to be right, so I let it pass: I had broken my nose and somehow missed out on the event ... I guess. It was -- or was it? -- another time.

Am I wrong or just playing the old-fart card to think that in the past there was less congenital whining (Brit.: whinging)? Today's universe seems rife with complaints, left, right and center. As I say, it may just be a symptom of old-fart-dom ("When I was a kid, we would blah-blah-blah...") but looking back, which is never my best thing, it seems to me there were fewer complaints.

Today's world is rife with a complaint at every corner and little sense that the shit hits the fan, always, for everyone... as if everyone were playing by Donald Trump's book of whines and lies and mischaracterizations. Broken nose? Who knows ... get on with it. If you can fix it, fix it; if you can't, stop whining. Stop trying to measure one pain against another.

Associatively, I recall the 1981 movie "Reds," in which one of the U.S. participants in the Russian Revolution sympathies of the early 1900's, commented approximately about the sexual freedoms of the time: "There was just as much fucking then as now. We just didn't talk about it as much."

Now, whatever "it" may be, it's the talk of the town. Trump supporters, Roe v. Wade supporters, tax benefit supporters, health care, sexual molestation ... there are victims as far as the eye can see and the internet assists in the dissemination of the information.

To the extent that any of this (more complaining now than then), I sense a hot air balloon getting fuller and fuller until it eventually pops, there may be blood in the streets, and everyone goes back to ground zero.

To the extent that this is all false -- just as much whinging then as now -- I sense a flatulent diminution of whatever social threads may remain.

As to my excuse for whinging -- as in this blog post -- I forgive myself based on the fact that I do what I can to keep the complaints compartmentalized in this blog. It ain't perfect, but it's the best I can manage. There's a broken nose back there somewhere, I guess, but there isn't much I can do about it these days.
Posted by genkaku at 7:58 AM