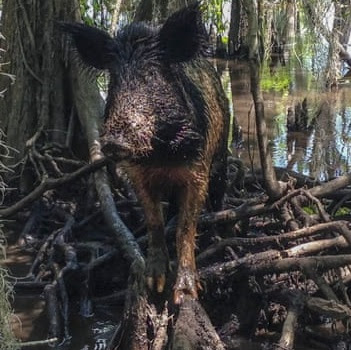 Beware the feral pigs: They fuck like bunnies and are invading the U.S. from the north! They may or may not be a walking billboard for the large-capacity clips that some gun owners are keen to keep in their arsenals.


Feral pigs are widely known as “rototillers.” They root around for their food and spend much of their time wallowing in landscapes from farms and open fields to forests and riparian areas, leaving the terrains unrecognizable. Aside from the damages left behind, they are elusive in nature and often become nocturnal when “hunted or pressured by human activity,” said Ryan Brook, a researcher and assistant professor at the University of Saskatchewan.
The pigs are also highly prolific.
Steuber said females birth around three litters every two years or so, and litters have been known to contain more than a dozen piglets. When grown, mature adults weigh on average between 120 and 250 pounds, but larger ones have tipped the scales at 400 pounds.
“They can decimate the range land by tearing up everything,” said Tahnee Szymanski, an assistant veterinarian with the Montana Department of Livestock.