Watching a TV program about the history of bluegrass music on TV last night, it became clear to me that I would prefer it if the word "swoon" were to become a transitive verb. 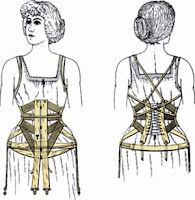 Back in the days of yore, when women cinched their waists to a breath-taking 15 inches, it was commonplace -- or anyway there was much-bruited anecdotal evidence -- for women to "swoon" at the first sign of any lapse in decorum.

[I know of no connections made between cinched waists and swooning, but since people are never quite as smart -- and never quite as stupid -- as you might imagine, I figure there was at least one bright penny who probably forged the links.]

Anyway, women swooned at the drop of an indecorous hat or so the stories are told. Swooning men were not similarly anointed or named: Swooning was not for those lesser lights.

But as I listened to the history of bluegrass music, I realized that some of its sharps and flats, banjos and mandolins, fiddles and guitars were utterly capable of swooning me. Music can swoon me and therefore deserved a role as a transitive verb -- not so much "I swoon" as "it swoons me." Beethoven's 9th does the same. And there are other segments of music that can creep in, curl up in a warming ball and ... just ... swoon me.