Glad to think someone -- in this case The Guardian?/Associated Press, I guess, is keeping an eye this one

Chinese scientist He Jiankui shocked the world by claiming he had helped make the first gene-edited babies. One year later, mystery surrounds his fate as well as theirs.
He has not been seen publicly since January, his work has not been published and nothing is known about the health of the babies.
Full Coverage:  Science 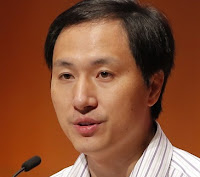 “That’s the story — it’s all cloaked in secrecy, which is not productive for the advance of understanding,” said Stanford bioethicist Dr. William Hurlbut.
He talked with Hurlbut many times before He revealed at a Hong Kong science conference that he had used a tool called CRISPR to alter a gene in embryos to try to help them resist infection with the AIDS virus. The work, which He discussed in exclusive interviews with The Associated Press, was denounced as medically unnecessary and unethical because of possible harm to other genes and because the DNA changes can pass to future generations.