.
I suppose that at the same time uncertainty and sadness impelled me to dabble in Buddhism, there was a concomitant delight in wizards. Every dark tunnel requires a light at the end of it -- how else could it be dark? -- and wizards were an expression of that light.

I was thinking about this last night as I watched the first of the Harry Potter movies on TV. As always I liked being showered with unlikely happenings and capacities that were depicted within the humdrum of what was likely. Wow -- magical shit! The movie was credible enough to me so that I watched several segments between the ads.

I never read the Harry Potter books, but my kids assure me they were good. I did read Charles Williams and (my favorite sci-fi writer) Ursula LeGuin and, although they were a bit more complex than riding broomsticks and defeating trolls, still there was an element of wizardry, of magic, in them both.

Wizardry ... some gob-stopping something or other that is, well, gob-stopping. Turning lead into gold. Flying. The frog turns into a prince. Harry Potter owns a wand and a command or rudimentary Latin and ... well, stuff happens.

And it's a short step -- if it's a step at all -- to those other gob-stopping moments, moments seen an completely new light, moments no one can speak of adequately. A piece of music, a sunset, a look between friends, the softness of cashmere. It's "wizardry" because there are no wizards and yet there it is, plain as the nose on your face.

As a kid, of course, I wanted to be a wizard 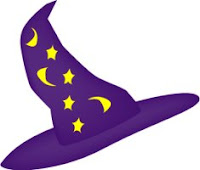 and have the world at my command. I would change what was displeasing and revel in what was pleasant. I would be the master of all I surveyed. I would be ... the wizard.

But as I watched about as much of Harry Potter as I could take, it occurred to me that real wizardry does not consist in making things different. It consists in the ability to make things what they truly are.

Now THAT would be a trick worth knowing.
.
Posted by genkaku at 7:02 AM