the apt perfection of the unknown

.
-- Once upon a time, a long time ago, in a story I do not exactly remember, the New York Times ran a front-page article about archaeologists in Japan who unearthed an old wooden box. Inside the box was another box together with a note. The note, which I believe included some indication that it was of imperial (a princess?) origin, said in essence, "Don't open this box." And the archaeologists didn't.

-- In an art gallery in New York, I was ambling around looking at the paintings when one of them brought me up short. It fairly blew me away. It was a painting of a mountain, but something about it absolutely absorbed me. It was like listening to a wonderful piece of music -- a gob-stopper. And as I stood stock still being enveloped by the painting, a gallery salesman walked up behind me and began to explain the painting, pointing out its characteristics and meaning and ... suddenly I was filled with rage. I was within an inch of literally punching him in the face. 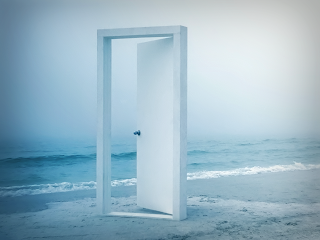 -- In the movie "Spring, Summer, Autumn, Winter ... and Spring," one of the beckoning peculiarities was the fact that in the temple that formed the focal point of the action and in the nearby woods as well, there were doors that had no walls to the left or right. The actors took great care to walk through the doors, although they might have gotten where they were going more quickly by walking through the space where walls might ordinarily have stood. It was an evocative bit of silence ... opening doors that didn't lead in ordinary terms from one space to another. I didn't know why things were configured in this way ... but if someone tried to explain it to me, I think I might have been as enraged as I was with the art-gallery salesman.


There is a deliciousness and an aptness to not-knowing. Things become clearer somehow when they are not at all clear. It is a time of preciousness that cannot be defined or dissected. It is like God without the intermediaries of temple or text. It makes your heart soar and a soaring heart is worth your literal life to protect ... if only you could figure out what you were protecting.
.
Posted by genkaku at 11:18 AM