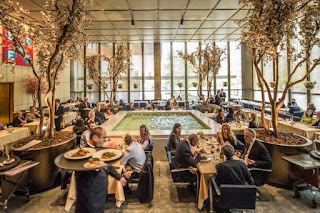 [C]ritic Jason Farago rhapsodized for the Guardian: “The restaurant’s heyday was the 1970s. Outside, the city came within days of bankruptcy, and the streets were choked with crime. Inside, tycoons and socialites conducted a choreographed spectacle of dining and table-hopping worthy of France’s ancien régime. “New York’s world of publishing gravitated to the Grill Room, as did magazine editors with expense accounts larger than the entire budgets of today’s viral content abattoirs.

And now the place will close after lunch on Tuesday.

I ate there three or four times, but as with other four-star eating venues allowed to me while I worked  in publicity for a book publisher in New York, there was too much about the setting that made my gorge rise.

First of all, the idea of discussing business over a meal is off-the-charts ("blasphemy" occurs to me but I'm not sure where to apply it). I'd use the line "Stupid! Stupid! Stupid!" but it has already been taken. You want to talk business. Talk business. You want to eat? Eat. The principle is one that seems to be pile-driver insistent in my DNA.

Second, minuscule portions do not necessarily make good eating. Artful decorations delivered by men whose accents are French and whose jackets are oh-so-body-hugging ... get bent! Eating is a deep gusto -- no simpering sissies need apply. This is LIFE and a blessing at that, asshole!

And most important: Eating is not a pretense, however pretentious it may be.

Why I get so cranky about a place I do not for a moment miss is nudging me. I guess it may just be my sub-rosa WASP background.

Maybe I'm just in the mood to jack myself up.

PS. In Iran, 547 restaurants and cafes were closed down Saturday for not adhering to "Islamic principles."
Posted by genkaku at 7:07 PM