people I admire and am sick of 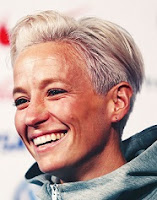 Is anyone else out there sick to death of the litany of people who have cast their lot and screw whom they please, when they please and the world can just piss up a rope?

My latest heroine, so to speak, is Meghan Rapinoe, an out-of-the-closet lesbian who also happens to be a class-act soccer player on the United States' soccer team. She has said of late that if the U.S. wins the title and is invited to the White House, she won't go. Donald Trump is anti-gay ... fuck him (or not, as the case may be). Does anyone give a damn what she does in the bedroom and is it their business?

Rapinoe joins, in my latter-day pantheon, with former football quarterback Colin Kaepernick who, while not known as being gay, took a knee during the singing of the National Anthem to protest treatment of blacks in the United States. He probably deep-sixed his career by kneeling, but what he kneeled for was a blessing on us all. 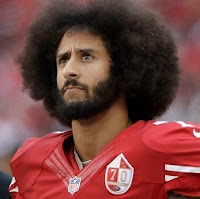 Let's get straight what is important and what is frivolous in a given situation. Rapinoe plays kick-ass soccer; Kaepernick was a pretty good quarterback and Trump, although he is president of the most powerful nation on earth, is frivolous. Should people like Rapinoe and Kaepernick be ground down by the likes of Donald Trump and his disciples? They are Americans. Trump is a Republican.

And simultaneously, I wish we could just get by all the ooooh and ahhh of sex and race and whatever other whipping boy is handy.

Rapinoe and Kaepernick bless us, but I surely do wish they could be consigned to the rear view mirror and everyone would just move along to the important stuff that has to do with important stuff -- human dignity rather than moguls and money-makers.