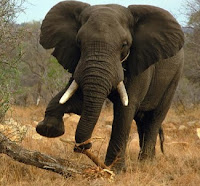 Multiple spectators were injured when severe weather hit the Tour Championship in Atlanta on Saturday.
Play at the East Lake Golf Club was stopped at 4:17 p.m. Saturday because of inclement weather, and with the tournament in a delay, players were cleared from the course, Golf.com reported. According to the Associated Press, fans were also told to find shelter from the storms.

Some fans chose a tree as their shelter point. Nature snickered and beat the shit out of the tree.

Even as kids, we knew not to take shelter under a tree in a severe storm: Lightning aims at the highest and most inviting point to get into the ground -- in this case, a tree. D'oh! As boys and girls sometimes do, so land and sky reach out for each other. Is information like that transmitted any more? It poses the question in my mind, "Who died and left you so stupid?"

Oh well, I guess everyone has a blind spot or two. But still ....

The Hindus, those granddaddies of spiritual smiles, have a tale that seems to amplify the question. Approximately, the story went like this:


Once upon a time a holy man was walking through the woods. He was deeply engrossed in his spiritual endeavors when, from afar, the voice of a mahout was heard screaming, "Get out of the way! Get out of the way! The elephant has gone mad!"

I guess there are holes in the holy skein.

Following in the footprints of the Hindu tale, for a long time as a news person, I used to collect stories about pilgrimages (a lot of nuns seemed to be involved) in which acolytes were climbing a mountain when the storm arrived. There were few points of cover, and the pilgrims were the tallest thing on the mountain face... and ... guess what ... holiness is no barrier when it comes to ignorance.

I guess it is good to keep an ear open for the mahouts of this life.