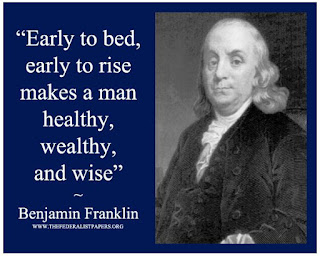 It was my now-dead Army buddy Bill McKechnie who reworked the wit and witticism sometimes attributed to American 'founding father' Benjamin Franklin:


Early to bed
And early to rise
Makes a man healthy,
Wealthy and wise.

McKechnie's rendition -- announced after what I can only assume was a night of too much beer, carousing and giggling:


Early to bed
And early to rise ....
And you never see any of your friends.