Trump gears up to step down? 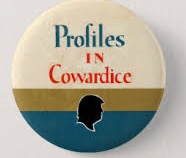 Niggling and naggling at the edges of my thoughts is the notion that U.S. President Donald Trump is shoring up his political nesting place in advance of his stepping aside from the U.S. Presidency.

Trump hasn't got the balls to lose and the House of Representatives vote on articles of impeachment in the upcoming week/this coming week looks (however scripted) like a loser.

A Senate exoneration is to follow the House vote.

Trump has fewer and fewer whipping boys -- people he can blame and fire for the errors he has made. And like any champ, he would like to go out on top. Or maybe this is all just wistful  wet-dream  thinking. Can anyone imagine his leaving office without saying, "I-told-jaso!"

And castrated Senate Republicans who don't dare to stand up for country or principle would like a safe harbor as they head home for the Christmas break and meetings with constituencies that voted four-square for The Donald.

Maybe someone will write a "Profiles in Cowardice" book ... but it's doubtful.

And  Vice-President Mike Pence as president? The artificial-intelligence Christian as president? Well,  let's take one pig-pile at a time.