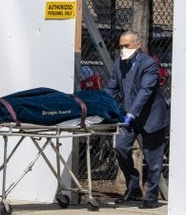 OK, we're in it for the long haul ... like a rug burn... the Corona virus. But if others are anything like me, they are tiring fast of the endless welter of epidemic stories and it's time for a change-up.

As for example, the resurrection of the I.D. column that once sketched out a reader and his or her background. It might be called "B. C." or Before Corona. Readers might write (and thus take pressure off reporting staff) about some aspect of their lives ... prodded by a Gazette suggestion, eg. "stuff my grandmother told me" or "my most valuable lesson" ... anything that was NOT knicker-twisting about the epidemic. The writers would be ordinary people (not the obvious do-good, yogurt and yoga and political talking heads.) Some people are nuts about collecting Hummel figures; some love horses more than they love people; some learned good lessons; some learned hard ones; everyone's got a favorite color or a secret love ... make a form that would pose the questions and let the readers have at it. Once or twice or thrice a week.

Don't we all wish it were just April Fools?!
Posted by genkaku at 5:47 PM