coping with the little red wagon

.
Having been brought up in an atmosphere that did not instill a sense that I could be kind to myself, I fell off the cliff in the other direction -- bending over backwards to be kind to others ... in the secret hope, no doubt, that they would offer me what had not, in the past, been offered.

Others I have known, grew up with the mirror image problem ... me ... it's all about my way, my views, my way of doing things ... my way or the highway.

And I guess some were reared in a more balanced setting, though how anyone would determine that, I'm not sure. The whole arena is a bit like one in which people are more than willing to define "insane" behavior and yet are stymied when it comes to defining or even outlining a generalized version of what might be "sane."

As I was driving to my son's baseball game yesterday, there was a woman author on the radio who seems to have made a cottage industry out of "self-compassion." She was talking about a Web site and a book she had created -- complete with self-evaluation tests. She was bright and chipper and I have a feeling she was probably making some money. 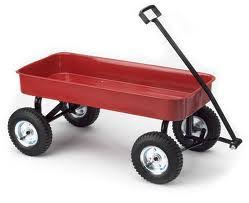 Not everyone needs a shrink or a spiritual persuasion to set their lives on a more even keel, but there came a time in my life when I chose both. I seemed to be dragging around a little red wagon full of self-defeating habits and uncertainties and I wanted to get things straightened out ... to be happy ... or at least happier.

Everyone's got a little red wagon ... or anyway that's my sense. Everyone's got the cards they've got. My shrink told me that people like me -- the I-don't-deserve-it crowd -- came out nicer at the other end of the self-examination process, but I have no way of judging that. My red wagon is still there. My cards have changed, I suppose, but they are still my cards. The important part is that those cards are not quite so surprising or debilitating. They are just the cards. The red wagon people pull around is a little like the "blue" in "blue sky." The important part is not to worry too much about it, to enjoy the cards.

A kind of mild curiosity lingers ... how the hell did I get these cards? And there will always be people willing to find an explanation or infuse some meaning or write a book or offer a discipline to address the matter. The cards...the little red wagon...the facts don't mind.

Shunryu Suzuki, a Zen teacher, was once asked how important Zen and its practices were. He replied, "It's important, but it's not that important."

If there's anything that beats laughter, I don't know it.

And don't need to either.


PS. Weeping is just another way of laughing.
.
Posted by genkaku at 8:28 AM