.
At 2:30 a.m., it was bright and important and interesting and chock-a-block with stuff I did not want to forget: Cracker Jacks.

Popcorn and peanuts covered in caramel ... often with a prize in the box. 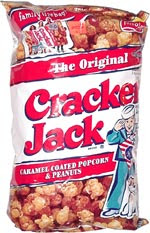 Sticky. A confection whose name later segued into a means of praise -- eg. "a Cracker Jack job."

But as I dozed closer to dawn, somehow I could no longer remember what importance it all had. If there had been some spiritual metaphor I was going to spin, I simply couldn't remember what it was. All I could remember was Cracker Jacks, a candy I had never found as delectable as, say, chocolate.

And after I rolled myself out of bed, got a little coffee and donned the functions of being awake, there was an email from a cousin who said her publisher and agent had agreed two days ago that her latest suggestion for a book was ... well ... they simply didn't like it. She had been banking, in some part of her mind, on acceptance and importance and work to do and suddenly the balloon simply lost its fullness. Ouch. She threw herself into cleaning the closet and, a day ago, came up with a new writing project to pitch to her agent, one that apparently was received more enthusiastically.

Important stuff. Really, at the moment it's important, it really is important. The oil spill in the Gulf of Mexico. The war in Afghanistan. Unemployment. The latest ways in which politicians would sidestep the hard choices necessary to helping the constituents they wanted to be seen as helping. Or the more mundane, up-close-and-personal stuff ... relationships and sock drawers and, oh yeah, what was it about Cracker Jacks that was important?

How many important things have come and gone and yet the habit remains strong ... THIS is important. On the one hand, you couldn't call it unimportant. On the other hand, if it's so all-fired important, how come it's not as important today as it was yesterday? I know, I know -- I can sit down and rework yesterday's lather so that it seems to maintain an overarching and ongoing importance, but is it true?

I do wonder what I thought was so important about Cracker Jacks. I know it was important, but ... what was it?
.
Posted by genkaku at 6:39 AM