.
If you've been to the opera or read a comic book or fairy tale, you know what it means to "suspend disbelief." I don't know about you, but I have never walked down a crowded city street and heard a bulldog-proportioned woman discussing politics with a friend in High C. But in the opera house or fairy tale, anything goes. It is the onlooker who is asked to "suspend disbelief," to imagine that this is the way things actually do occur.

But which is it that we do when we go to the opera or read a comic book: 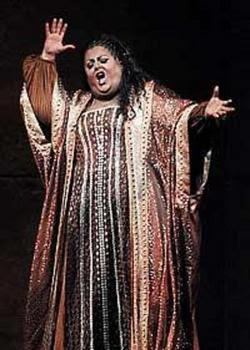 Do we suspend disbelief or do we suspend belief? I was brought up saying the former, but I have heard people say the latter and it makes perfectly good sense too... to suspend a belief that people do not generally converse in High C.

Unless I am completely off-base, this suggests that the distance between belief and disbelief is ... what? ... non-existent? -- same stuff, different spelling? But how can belief and disbelief be the same when they might be offered as antonyms -- pure opposites in which chasms of difference reside?

I guess none of it matters much, but it whispered in my ear this morning and I wondered again about all the fervor that can go into belief and disbelief.

PS. And yes, I put the picture in there to forestall any comments about "it ain't over till the fat lady sings." :)
.
Posted by genkaku at 11:52 AM