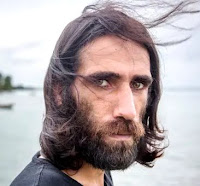 Artistry, criminal and otherwise, has its prices, I guess:

Off the coast of Australia, author Behrouz Boochani has apparently been informed that his book "No Friend but the Mountains" had won both the non-fiction Victorian premier's literary award ($25,000) and the $100,000 Victorian prize for literature (same book)... top-drawer literary awards.

A Kurdish Iranian asylum seeker, Boochani could not collect his prizes because he is not allowed into Australia.


A drug trafficker who managed to evade capture for 15 years by cutting and burning the skin of his fingertips and having it replaced with micro-implants has been arrested by Spanish police.... A police spokeswoman told the Guardian: “'He’d used very sophisticated methods to alter the fingerprints of both hands so that he couldn’t be identified. He used skin implants to change the shape of his prints so that the scars beneath couldn’t be detected. It was a very sophisticated, specialist process that took place over a number of years.'