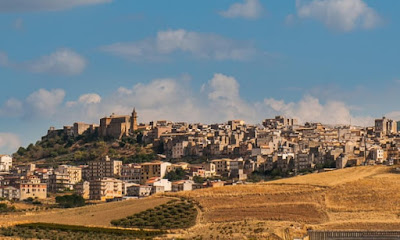 The lackadaisical, the fairy tale, the useless bit of irrelevant information ... such is this mind as it scans the news wires this afternoon. I can't keep up with the worldly-wise and weighty... the wars and famines and misfortunes of far and wide. Someone else will have to do it. Moi, I am left lolling and rocking in....


....you would still be hard-pressed to find a cheaper property than those on sale in one Sicilian town, where homes are going for as little as €1.
Dozens of properties have been put up for sale in Sambuca, a hilltop town with stunning views across the Mediterranean island, for less than the price of a takeaway coffee.
The deal is a bid to revive an area that has undergone depopulation in recent years, with residents moving to bigger cities.

And I want one.

Of course there's a hitch. You have to be willing and able to fix up the newly-acquired property.
But still ... it's down-to-earth. It's direct. And I can understand it and thereby be rolled into its wishery-pokery. Of course I have neither the disposable income nor the requisite youthful energy, but still....

A fixer-upper makes my hammers and wrenches, long since set aside, rattle for action.
Posted by genkaku at 5:50 PM