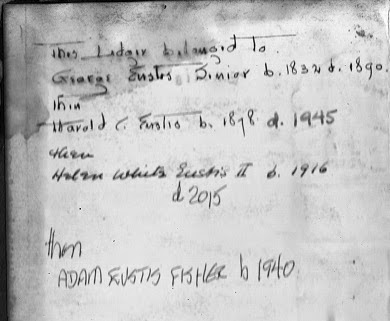 Received today in snailmail a ledger and sketch book that had belonged to my mother's father, Harold Claypoole Eustis, and his father (George Eustis) before him. I haven't had time to look closely, but pasted into the ledger is a news story on fragile newsprint about my grandfather's joining the British army as a captain in 1915.

The United States did not enter World War I until April of 1917, but it was not unusual for Americans to go to Canada and enlist before President Woodrow Wilson finally signed the United States up to fight. I do not know my grandfather's motivation, but he lived in an era that followed on the heels of Theodore Roosevelt's presidency and Roosevelt was a man who talked up his bully wars and his patriotisms. "Honor" -- which required a person to do for others or for his country what he might prefer not to do -- was something taken seriously and held dear.

My grandfather committed suicide in 1945.

CINCINNATI
MAN IS TO
FIGHT WITH
CANADIANS


His Offer of Enlistment
Accepted by British


Troops May Be Moved to War
Zone in Near Future


Word was received in Cincinnati Friday that H.C. Eustis, former lieutenant of Troop C. Ohio National Guard, has received his commission as a captain in the Canadian forces enlisted for service in the European war. Captain Eustis left Cincinnati several months ago and went to Ottawa where he tendered his services to the English government. He was assigned to the Canadian Mounted Rifles and his commission is dated from January 1, 1915. His company is  attached to the Fifth regiment of the Mounted rifles and it is understood that the force will be moved to England within a short time.


George Eustis, the broker, was in receipt of a letter Friday from Captain Eustis, but at the time it was written he had not been notified about his commission and was still doubtful about the future movement of the troops.


A dispatch from Ottawa, however, carries Captain Eustis's name among the American officers who have been accepted by the English government for service in the great struggle. Other American officers mentioned are Major Charles W. Stewart, late first lieutenant of the Fifth Cavalry, U.S.A., who is now serving in charge of the remounts on transport to England from St. John, N.B., and Captain Herbert W. McBride, late of the Indiana National guard, who is detailed to musketry instructor at Kingston, Ont., of the Thirty-Eighth battalion of the Canadian Expeditionary force.
Posted by genkaku at 7:56 PM