the land where the names fall off 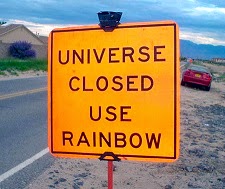 When I was a kid, students would be given flour and water as a means of pasting bits of paper together. It worked well enough and the mixture was easy to wash out when it invariably got on shirts and jeans. Later, there would be more powerful glues and adhesives, stuff that bonded with a permanence that could not easily be erased: Miracle Glue and the like.

Lately, things feel like flour and water once more. The sense of permanence and power and importance just doesn't stick as convincingly. And it's not as if there were any choice involved: Old age nourishes a dwindling of energies and a concomitant triage: What's necessary and what's not so necessary shape-shifts.

Yes, the flour and water of names can be appended, but is it really that important or even true? The question itself is a bit frightening: A lifetime of Miracle-Glue-ing stuff together had and has social implications. Where the names fall off, it's easier in one sense, but more lonely in another. "Easier" in the sense that no baby ever came out of the womb with a name and things without names are lighter and closer to the truth. They require less of the dwindling energy. But the names have made so many friends and acquaintances over time -- connections that warmed the way. Without the names, the reality of connection is more apparent and less special, but a nice bull session or social activity seems to fade like the power of flour and water.

These days I read the news or munch some idea and if I don't make a lock-down effort, I am entirely likely to forget it inside a few minutes. It just seems to trail off and the vast importance a topic may have had on arrival is gently set aside or reshaped in departure. I too would like to praise and blame, applaud and hiss, be deeply concerned or dismissively indolent. But all that takes names that have a weight and heft and lifting weights is no longer my strong suit.

None of this happens all at once. Occasionally some writing or thought topic will spring up as of old and I can feel the blood-lust enjoyment of importance and meaning. But increasingly, writing walks away in the land where the names fall off.

By naming the phenomenon, of course, I play into the hands of a long-habit Miracle Glue world. Naming the name of no-names ... what a sissy! Still, writing and thinking is such a long-standing habit that I suppose there is no escaping its residual talons. It's a way to communicate and make friends or enemies as the situation dictates.

I kind of miss it and simultaneously don't -- the connections once asserted and thereby camouflaged the connections that don't really exist. It takes two bits of paper and some flour and water to create a "connection" and increasingly I lose the energy to credit "two" of anything.