After the better part of three years in the army in the early 1960's, I was given the usual pep talk about all the advantages I might enjoy if I "re-upped" (signing on for another three-year hitch). My mind, however, was pretty much made up: I really did not want to work for an organization from which I could not be fired.

But sub-rosa, another understanding also asserted itself. I had  been in Berlin for almost two years. I had been trained to speak the language. There had been some wonderful and not always decorous times. I liked Berlin but ....

Friends and acquaintances who were getting similar pep talks were also weighing their options. One guy wanted to get out of the service, travel to Africa and become a mercenary soldier. Another fellow had a girlfriend with whom he wanted to remain. And the large majority just wanted to get the fuck out.

But there was another, somehow surprising, revelation that snuck up on me: I missed my homeland. Flag-wavers may say "d'oh!" but I had a comic-book idea that somehow I was a world-traveler, someone who liked to go places and do things and learn all sorts of stuff: I was not tied down or dependent on the country of my birth.

The revelation popped out of my mouth unbidden one evening when I was talking with a buddy about getting out of the service and going "home."

"I want to live somewhere where I can say 'the Lone Ranger,' and make an instantaneous connection."

And from that single sentence, a hundred-hundred other restful connections asserted themselves ... slang, punch lines, baseball, politics, religion, books, Boy Scouts, poor beer, music, Hollywood, a kind of youthful boisterousness that goes with a lack of history ... I guess it qualified as "culture" or something close to that. The more I thought about it, the more I felt I had to be honest. And the more I relaxed ... OK, I was stuck with the American farm ... just try not to fuck it up too badly or create too much harm. 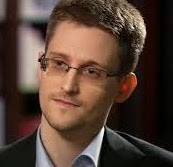 I guess the thought crossed my mind because today the BBC had a small article asserting that NSA whistle-blower Edward Snowden was likely to have his yearlong visa extended in Russia. I felt sorry (based on my experience) for Snowden and grateful to him. Most principled positions these days seem to be tossed away like Kleenex at the end of a good blow. Sticking with it, gutting it out, paying the price, and bearing the criticism of 'true' Americans takes grit when it is not busy being insane.

Imagine (from my point of view): In order to be a patriotic American, you have to live in another country. I would like to apologize to Mr. Snowden and tell his terrorist, neo-con critics to stick it where the sun don't shine.
Posted by genkaku at 7:55 AM