do we get a break now?

OK ... Donald Trump is now president of the United States. Unless I'm mistaken, everyone is being circumspectly muted: Do they want a place at the trough more than they want something resembling honor? It's not clear which way to jump.  Trump signed on yesterday; Obama signed off.


Trump took his first steps in that direction on Friday. Before attending his inaugural balls, he signed an executive order aimed at undermining former President Barack Obama's signature health care law. The order notes that Trump plans to seek the "prompt repeal" of the law. But in the meantime, it allows the Health and Human Services Department and other federal agencies to delay implementing any piece of the law that might impose a "fiscal burden" on states, health care providers, families or individuals.

And so the bullshit begins: Repeal the health care law ... well, sort of ... if it is not too discomfiting ... and you just know who's going to end up holding the slimy end of this stick -- the very people who cheered Trump on. Repeal health care without coming up with a replacement ... but blaming the Democrats for a lack of a replacement ...

It all makes me wonder a bit how different -- in reality -- things might have been if Hillary Clinton had won.

And if anyone missed it, the people who need the most help receive the least of it, I suspect. 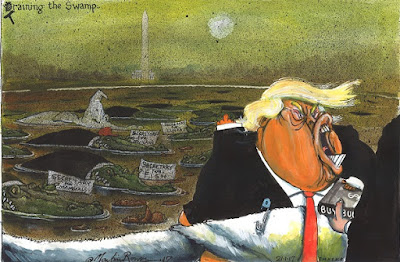