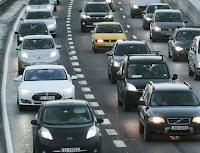 OSLO, Norway (AP) — A silent revolution has transformed driving in Norway. Eerily quiet vehicles are ubiquitous on the fjord-side roads and mountain passes of this wealthy European nation of 5.3 million. Some 30 percent of all new cars sport plug-in cables rather than gasoline tanks, compared with 2 percent across Europe overall and 1-2 percent in the U.S.
As countries around the world — including China, the world’s biggest auto market — try to encourage more people to buy electric cars to fight climate change, Norway’s success has one key driver: the government. It offered big subsidies and perks that it is now due to phase out, but only so long as electric cars remain attractive to buy compared with traditional ones.

Clean air for the wealthy, perhaps, but at least the air is cleaner ... and some pride can be taken in the political balls required.