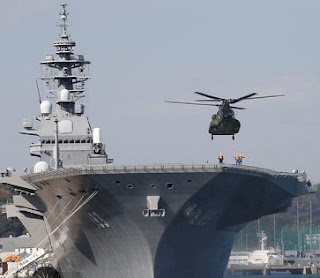 TOKYO (Reuters) - More than 82,000 well-wishers paid their respects to Emperor Akihito who turned 85 on Sunday, his last birthday celebration at Tokyo’s Imperial Palace before stepping down next year...
Although he cannot directly influence government policy, Akihito has created a broader consciousness of Japan’s wartime past throughout his symbolic reign, experts said.
In comments made to the media ahead of his birthday, Akihito said “it is important not to forget that countless lives were lost in World War Two...and to pass on this history accurately to those born after the war”.


[Japan Today] TOKYO
As Japan's defense policy seems to have taken a new twist through a decision to seek the deployment of an aircraft carrier, doubts remain over whether the plan will best serve its national interests as it struggles with China's growing threat.
Possessing an aircraft carrier has been controversial in and outside Japan in light of its militarist past and the pacifist postwar Constitution, which restricts the country from possessing what are deemed to be highly offensive armaments.
But Prime Minister Shinzo Abe's government ventured into the move by endorsing on Tuesday a new five-year defense buildup program that includes a plan to transform existing Izumo-class flat-topped destroyers, currently used as helicopter carriers, into ships capable of launching short takeoff fighter jets.