"The 14th Dalai Lama" in comics

.
I love surprises -- things that seem to have no particular bearing on what went before or came after -- but I have to say that receiving a pre-publication verson of "The 14th Dalai Lama: A Manga Biography" by Tetsu Saiwai was pretty much off my charts.

The volume is a comic-book version of the Dalai Lama's life. 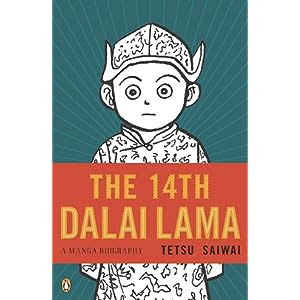 Its unnumbered pages seem to be about 200 and its publisher -- a publisher I used to take seriously -- is Penguin Books. The retail price is set at $15. It's in English.

Its mediocrity of intent and execution leave me asking myself, "What's the matter with me?" "What cultural wave has passed me by while I was busy doing something else?" and "To whom would such a book be useful or informative?" "What would make a publisher gamble the time, energy and money on a 200-page comic?"

No matter how I twist the matter, I just can't figure it out. Would someone interested in the Dalai Lama want a 200-page comic? A kid? An adult? High-falutin' propaganda? Is someone at the publishing house sleeping with someone else?

Very peculiar in my mind and the more I concede the peculiarity, the more I struggle to see what I must have overlooked -- some segment of the human race that sees things in a wholly different light.

Well, it was a surprise all right. The only difference with other surprise moments is that I imagine I have an explanation and meaning that I can ascribe to them and thus put them out of my mind ... "I know that!"

Between knowing and not knowing, my guess is that knowing is more dangerous.
.
Posted by genkaku at 8:11 AM