.
Towards darkness, a small group of us trudged up a rise near the school and prepared to settle down for the night in the snow tunnels we had dug during the day. 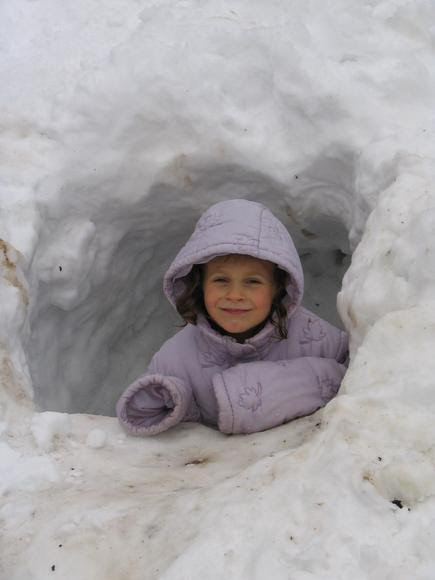 There was a snow fence at the crest that raised the drifts to six or eight feet and we had had a good time creating all sorts of byways within ... and finally got school permission to sleep out in them. We were in the sixth or seventh grade and sleeping out on weekend hikes and the like was part of our world.

As night descended, each of us chose a tunnel, laid out our sleeping bags and prepared to sleep as we talked back and forth. "Everyone OK?" came one voice. "OK over hear," came another.

The temperature outside the tunnels was probably 10 or 20 below zero F, but inside the tunnels there was no wind and it was perhaps 30-40. After a while, the chatter died down as first one and then another of us drifted towards sleep.

But not me. In the silence, all I could think was that our body heat was likely to melt the snow around us and we would wake up fatally buried in the tunnels we had constructed. No one else seemed to worry about it, but I did, and finally I got worried enough to move my sleeping bag right up to the lip of the entrance hole in my particular tunnel. I wanted some form of escape route from the protective walls I had chosen. It was colder in the 'doorway,' but it calmed my frazzled nerves.

Funny how we choose some protective garb or situation as a means of warding off the cold dangers that are available ... only to find that our protections themselves shape new and subtler threats. Education, profession, marital status, travel ... each holds out a protective and in some cases delicious talisman, one that will keep other difficulties at bay.

But once having achieved the safety net, the silence sets in and the no-escape potentials begin to hum like bees ... at which point another bit of safer ground is sought out or erected.

Where is the safer ground, the ground on which the feet are firm and the heart is at ease? Hang around long enough and it becomes clear that there is no guaranteed safety hatch. Circumstances arise and there is no place to run, no 'other' way out.