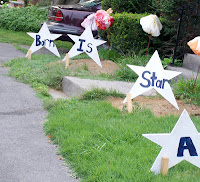 Rufio, once confined between covers as the leader of the Lost Boys in the children's story book, "Peter Pan," was born on Monday to my neighbor's daughter, Kimberly. Joe, my neighbor, came across the street early this morning and filled me in on the details.

In recent times, I had seen Kimberly now and then from across the macadam, walking to her car with a belly more pronounced than that of a beer-swilling Red Sox fan. Joe said the birth went normally, but that afterwards, the clamp placed on the umbilical cord had somehow slipped off and Rufio bled until he turned blue. Today, Kimberly and Rufio are at Kimberly's boyfriend's home in Middletown, Conn., and things are fine, Joe said. To celebrate the new arrival, Joe cut out plywood stars and placed them on his front lawn together with poofy, tissue-paper flowers. This morning seemed an inopportune time to ask Joe, a devout Pentecostal Christian, if Kimberly and her boyfriend, whose name I don't know, were planning to get married. I'm sure Rufio doesn't care one way or the other.

A
STAR
IS
BORN

... flashing across the firmament in bright splendor against a backdrop of all the other stars, some of them blinking and winking and then succumbing to the soft darkness in which brightness is so bright... going, going, gone.

The summer season, born an instant ago as it seems, is likewise slipping away. The Japanese maple in the Massi's front yard still bears plump red leaves, but the shoots on which a small horde of squirrels once feasted with skittering abandon must have worn out their welcome in this earthly firmament: The squirrels no longer leap from branch to branch, hang upside down in order to reach their nourishment or take a break and chase each other in playful exercise. Instead, I see them on the ground, loping across the street with green orbs in their mouths ... a nut of some kind housed in a green pulp ... something to store up and hide away as winter approaches. I don't imagine the Japanese maple gets lonely for their antics any more than Rufio would care if his parents were married.

And around our house, it is a season of egg shells ... everyone trying not to make too much noise about the changes in the offing, the new stars preparing to be born. Tiptoe, tiptoe, and yet no matter how softly anyone treads, there is the crunch of change. Just about the time the firmament has settled in the mind and heart, a star is born.

Tomorrow, my older son Angus will return to college. He has been around the house, working a part-time job with some crazy hours and yet fulfilling his responsibilities responsibly. He is looking forward to his junior year, his return to college, his escape from the doldrums of "home" and yet ... and yet... and yet ... who knows what lies across the dark sky of the future? His mother has thrown herself into this homeleaving because there is no other choice -- buying supplies of dental floss and vitamins and needed clothing and issuing questions and answers and orders with a tiptoeing vigor. She will miss him as I will ... with a desperate parental missing that is laced with the certain knowledge that wishing the best for your child includes the willingness to ship him out the door ... anything less would be to cripple the very creature you hope will be free and competent and happy. It's a conundrum, but the firmament is not confused.

Meanwhile my younger son, at 18, is wrestling with whether to go to college, which he really doesn't want to do, and going into the Air Force, which is about the only military option his parents are willing to consider. Who in their right mind would want to be 18 again -- an age at which the uncomplicated comforts of childhood run headlong into the desire to be an adult without knowing what the hell an adult might be? My son aches to be right. He aches not to be wrong. And I ache to ease his aches. He gets pissed off when family members tell him a military choice is "unacceptable" as if they, in their opinions, were the arbiters of his fate. But he is not completely reassured when someone near and dear tells him he is right. What the hell is this all about?! Right is right and wrong is wrong, right? And of course it's wrong, but that doesn't stem the tide of wishing to be right, to be settled and assured. It's enough to make a blind man weep ... facing a world whose cares do not accede to your cares ... becoming an adult ... becoming your own star. And from a parental point of view, if he were to join the military, he would be gone and home would be that much more empty, like a tooth pulled out ... the hole remains; it's not precisely painful, but the reminder is there, firmament-like in its no-longer-present assertions. My son will have to become an adult, and as he does so, I will have to become an adult as well.