gratitude for my teachers 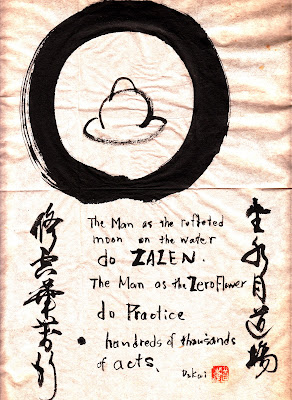 Above the computer corner where I slouch, I have tacked momentos of the past. I had to force myself to tack them up in the first place, but now that they're there, I don't generally pay attention to them. Pictures, an old hack license, a graduation certificate from the Army Language School, a New England Newspapers UPI first place award for a series of articles on alcoholism, a poster once sent by a now-dead friend saying, "50 LBS NET WT ... SWINE" with an etching of what looks very much like a smiling pig... and a couple of other things, including a calligraphy once sent by a Zen monk friend, Dokai Fukui.

None of these momentos are intended to prove anything in the way that a doctor or lawyer might hang things up to prove (and perhaps improve) that they are who they say they are. They are indicators of what I tend to forget. Perhaps they prove to me that I am who I say I am.

Anyway, today my eye lit on the calligraphy and mindset of Dokai Fukui, a monk who, together with the writer John Blofeld, once took me under his airmail wing as we corresponded about Zen Buddhism. I was new and enthusiastic and stupid and the letters that flew to and fro across the Pacific (Dokai in Japan, Blofeld in Thailand) were full of caring reminders ... try not to make too much of it all; try not to be an asshole... which of course was impossible. To my mind, serious spiritual endeavor is built for nothing but assholes, and the quicker anyone gets that fact straight, the quicker the usefulness of spiritual endeavor will become apparent.