Missing as yet from the Labor Day Weekend skies are the hot-air balloons that take off from a jam-packed fairgrounds perhaps half a mile away and then float, hissing and silent, over my neighborhood.

Wikipedia describes the Labor Day holiday in the United States as:


Labor Day in the United States is a holiday celebrated on the first Monday in September. It is a celebration of the American labor movement and is dedicated to the social and economic achievements of workers. It constitutes a yearly national tribute to the contributions workers have made to the strength, prosperity, and well-being of their country.

Given the economy, the definition has a kind of icy ridiculousness -- a holiday to keep the peasants happy since honoring its accomplishments ... well, those with hot-air balloons know the value of hot air. 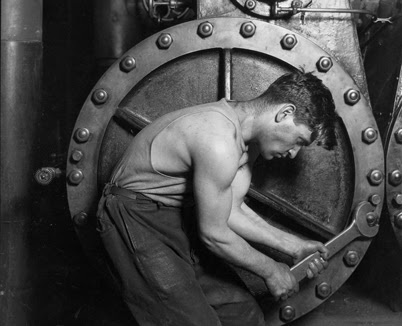 Many people get Monday off by way of celebration. A long weekend is probably welcome to those whose "productivity" inflates the pocketbooks of others, if not their own.

Yesterday, two immaculate automobiles from the 1920's puttered by my house on the back road that leads to the fairgrounds. Boxy, buffed and utterly nifty. The fixed horse races that once marked to fairground celebrations have been done away with (gambling is so déclassé, dontcha know) so there are fewer drunks driving by my house: The fair these days is top-heavy with music and kiddie rides and farm animals... a small venue that resembles gatherings in Hollywood and Versailles -- a place to see and be seen.

But where are the balloons? The weather is good -- clear, with small breezes -- but the balloons have not yet appeared. In years past, they dotted the skies and there was something delightful and uplifting in it. Who knows -- maybe there is another new and improved rule that disallows them.

Or maybe it's like owning horses -- another mark of casual wealth: Ballooning is a fairly expensive hobby and in 'productive' times, even the wealthy feel the pinch: What would the peasants do with a balloon if they saw one? It's more pricey than it's worth ... as, for example, to the Chinese middle class that is currently buying up Manhattan. Let's skip the balloons and add another bathroom. Wealth trickles down, right? Fried dough and Pepsi are enough.

The hot air has gone out of the hot air that once inspired the 'productive.' Or anyway, that's how it currently seems. Whatever the case, I do miss the balloons: They have no concrete meaning and from that perspective take on a meaning of some delightful kind.

Hot air and colorful floating. Hot air and labor gets a pat on the back. Hot air ....
Posted by genkaku at 7:36 AM