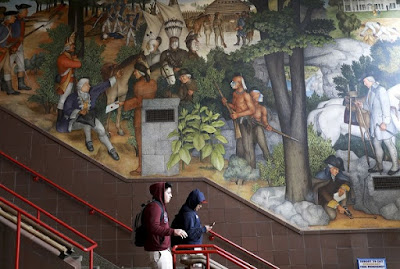 SAN FRANCISCO (AP) — San Francisco will spend up to $600,000 to paint over historical artwork at a public school depicting the life of George Washington, a mural once seen as educational and innovative but now criticized as racist and degrading for its depiction of black and Native American people.
The “Life of Washington” was painted by Victor Arnautoff, one of the foremost muralists in the San Francisco area during the Depression. The San Francisco School Board’s decision to paint over the 83-year-old mural is prompting some to worry that other artwork from the so-called New Deal era could face a similar fate because of changing sensitivities.

At the end of 1933, when Adolf Hitler was appointed as Germany's chancellor, the author William Shirer, then a reporter, noted in his diaries that perhaps 200 people filled the space beneath the balcony from which he received adoring cheers. Was it possible that the crowd was small because there were those still alive who remembered the utter horrors of World War I ... and the fact that Hitler seemed bent on yet another war-like trajectory? No one who remembered could cheer another blood-letting. No, no and again no! Paint it over! Love the motherland, repaint the ugly past!

Changing sensitivities. If you paint it over, does that absolve those whose memories wave some crooked flag? If you paint over slavery, is it thereby dissolved?

Where I live today, there are colleges aplenty. The well-heeled pay $40-and-more-thousand dollars a year for their children to receive an Ivy League education which includes, in my neck of the woods, a willingness to disallow speakers whose hateful language and ideas. Selective editing allows "anti-Semitism" to apply to Jews, but not others, in Semitic lands. If someone is not allowed to fly the Confederate battle flag, is emancipation somehow more true?

Imagine paying $40,000 for an education that excises the mean and nasty ... Gawd what a bunch of intellectual sissies!

In which of his books does Mark Twain put a man with a double-barreled shotgun on a porch, squaring off with a lynch mob determined to hang the black man in the house behind that gun. True, the mob can overwhelm the shot-gunner ... but not before he sends some of them to their maker.

The sissies abound.
Posted by genkaku at 6:14 PM