the white world of Wimbledon

Once upon a time in college, a billiard-crazed friend of mine (on a "snow day," we played billiards from 8 a.m. until midnight) pointed out that there was a badminton tournament scheduled at Babson -- an upscale business school near Boston -- and the two of us, as people who enjoyed tennis now and then -- should probably sign up. Which we did.

Badminton may be a backyard summer pastime for some, but of course others (as where the Britannic scepter has waved -- take it far more seriously. What did we know?

Anyway, Keith and I signed on. I found an old pair of slacks and cut them off at the knee for the shorts I didn't have and then scavenged a last-legs T-shirt to fill out my ensemble. And if I was Mutt, Keith was Jeff ... pretty much equally as raggedy. And then we showed up at the designated gymnasium at the designated time.

My first opponent showed up in tennis whites, a bag with three rackets whose handles protruded in gay and well-heeled array. The guy also had three salivating young women for company. I envied him. I think the contest was to win two of three consecutive games. I was beating the absolute crap out of my opponent when he (I believe) feigned an injury and withdrew ... taking his delicious ladies with him. The ragamuffins (that's me) were in the lead! If you can't be rich, be righteous, right? The scores were lopsidedly all in my favor when it came to racquets and shuttlecocks. Frankly, I think I would have preferred the curvaceous company. Oh well.

Mr. Three-White-Sweaters-and-six-breasts withdrew and in his place came my second opponent, a guy whose name I will never forget ... Bon Ke Yap. No shit, that was his name and if I was raggedy, I couldn't hold a candle to this guy. He was all diffidence and politesse entering his end of the court ... where he proceeded to trounce the bloody crap out of me. It seemed that wherever I hit the bird, Bon Ke Yap knew where it was going, knew how to get there seemingly without effort, and knew where I was not going to be for his wrist-flicking return. The only reason I got three points (of a cumulative 30) from the two games he beat me at was his sense that grinding an opponents poor play in his face was ungentlemanly. Jesus, did he beat the shit out of me.

And his clothes were worse than mine.

I subsequently learned (or did I just console myself?) that people from Cambodia and Thailand and similar lands exit their mothers' wombs much as Canadian off-spring do ... Canadians come armed with hockey sticks; Cambodians et al appear with badminton paraphernalia in hand. (How's that for a bias?) Rule Britannia!

All of this came flooding back this morning when I decided to watch a little of the Wimbledon Tennis Championships. There were smatterings in the news about the 15-year-old phenom, Cori Gauff, who had managed to beat one of her heroines, Venus Williams. Imagine -- 15 years old and poise enough to withstand the adulation of Wimbledon ... and the fact that she's a brown young woman and tennis, like it or lump it, is a white man's world, a privileged world, a world of blonds etc.

Not true! the WASPs will whine. Anyone can play. Everyone has the opportunity. 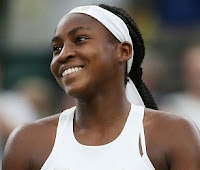 Anyway I tuned in to Wimbledon and enjoyed remembering the enjoyment I had found in playing tennis ... and even badminton. It's lovely to see anyone do something well .... to feel the muscles react in an anticipation once felt. Man oh man! And I marveled at what I saw of Gauff ... 15-fucking-years-old! I hope she won't be too badly scarred.

And then I began to look at the crowds ... at the advertising for brokerage houses, and high-end automobiles and and slick watches and whatever all else held this program aloft. I peered at the crowds. White, white, white and often dressed in white. No doubt the girls who once went to the badminton match were grandmothers among them now.

I have long admired Arthur Ashe, the black tennis player who won Wimbledon and was once ranked as the world's best tennis player. I admired his grit, yes. But I admired him later, after his tennis days, when he would address young blacks and tell them that there were only 6,000 total sports jobs in all of the U.S., population 200 million or whatever it was at the time. The odds of their getting one was thus very difficult and they needed a Plan B -- an education that would sustain them if they found no athletic exit from the unspoken poverty and disillusionment and segregation that could pound a black man or woman down.
Posted by genkaku at 3:54 PM