certainty or uncertainty ... the mystery

.
I suppose discomfort and longing are the progenitors of mystery. If you can't explain something, you might want to find a way to explain it ... "it's a mystery," sounds good, or, "the Tao that can be spoken is not the true Tao." I am as much a sucker for awe and meaning as the next fellow, but really, how long can anyone keep up such a pretense? How long must anyone accede to uncertainty? How important is the certainty alluded to in a "mystery?"

When I worked as a newspaper reporter, the touchstones were "who, what, when, where, why and how." Opinions and sincerities were kept in check, though of course there was always bias in what words were chosen and in what order they were placed. As a reporter, curiosity and the willingness to dig into the mystery were the tools of choice. Eventually, having dug far enough -- or after the city editor had yelled at you to "get the goddamned thing done! -- you wrote the story and, because it was written, because it was printed, or because other people may have read it as authoritative, the mystery was solved, sort of. There was more certainty and less uncertainty. 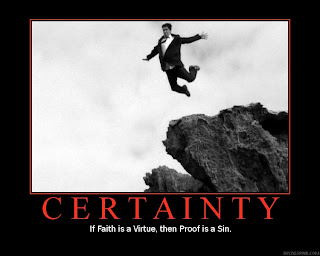 It's pretty smart to look into the certainties of others or the certainties of our own. But if it makes sense to examine our certainties, what makes us think that failing to examine our uncertainties is sensible? Isn't uncertainty -- and the weaving of mystery that may follow on its heels -- just another expression of certainty that deserves investigation? Is there really much difference between falling prey to certainty and falling prey to uncertainty? Maybe what is called a mystery is just another form of laziness ... I don't know: It's a mystery.