.
When I was a kid, I finally came into possession of my first B-B gun, a Red Ryder, lever-action rifle. It was a terrific feeling. And shooting it filled up endless hours of roaming the woods on Cape Cod, where I was at the time. 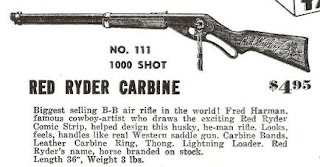 But once the rifle had become a part of my existence, once the bloom was off the excitement of at last owning what I had longed for, there was a new target of longing and satisfaction. Sometimes I could feel the gun getting low on B-B's. I would have to get more, but the store was far away and required my mother to drive me there, a thing she would not do simply based on my need for B-B's. So when I was low on ammo, I would husband my shooting -- hoping there would be enough to take me to the next resupply and resumed shooting pleasures. That truncation of my shooting made me extra happy when at last I could reload -- fill the rifle all the way to the top. THIS was the way things should be ... fully loaded, a bright future ahead and not a cloud in my mental sky. I was complete.

But what a good moment it was. Why wasn't every moment as at-peace and delighted as this? Why couldn't I always be so downright satisfied? Why was it that every successful satisfaction seemed to dwindle away and turn into some new chore or worry or effort? I wanted all of life to be like a full B-B gun.

And of course the B-B gun syndrome didn't end with B-B guns. Endlessly the satisfactions rise up and enfold. Endlessly, they drift away and are replaced. Again and again. Over and over.

Goddammit -- why COULDN'T life be like a full B-B gun!?

I suppose that's a question that Buddhists might want to tackle. :)
.
Posted by genkaku at 10:30 AM