a world of art

.
The old sports reporter, Red Smith, once wrote, approximately, "Writing is easy. You sit down at a typewriter and open a vein."

When it comes to art -- any sort of art -- maybe blood is the common denominator. Blood is intimate. Blood is that without which no one could soar. Your blood is your blood and mine is mine and yet everyone bleeds the same color. In blood, we are the same and different.

Yesterday, I hit the roof. I was infuriated enough to sound off in an email to Julia, a painter whose work I really like. I didn't know where else to turn. I was enraged. Everyone has buttons, I imagine, and one of mine -- together with war and, occasionally, spiritual life -- is art. I'm too old to try reining it in. Being infuriated is quite satisfying -- an ego trip, but still, somehow, delicious. 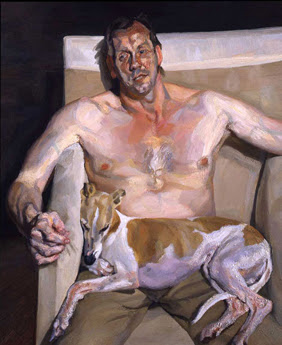 The springboard for my towering fury was an obituary of the painter Lucian Freud, a painter I had never heard of and knew precisely nothing about. Freud, the grandson of psychoanalytical obelisk Sigmund, died in London on July 20 at the age of 88. There were no photos of any of his paintings accompanying the obituary so I did the reporter/editor might have done and looked up examples available on Google.

Although there were no pictures accompanying the article, there was plenty of praise. I had an unkind hunch that putting pictures where readers might actually see them would have eviscerated the lavish flounderings of the art-critic appreciations: After all, if you can see for yourself what is praised, the praise itself collapses like some unused condom.

Here is an example of the praises accorded to Freud's paintings:

“They stop you where you stand,” Washington Post critic Paul Richard wrote at the time. “It is as if gravity itself had somehow been increased. . . . Freud’s pictures have a sense of time expanded, not easily explained. Anchored to the present, they seem to preexist the photograph. 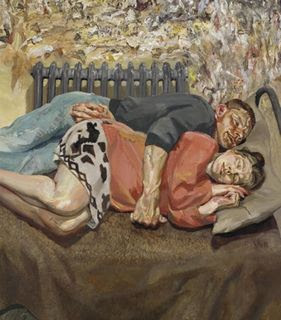 Julia, as someone in the transfusion business, wrote back soothingly:

I too am not too fond of those art critics. You do have to admire their capacity to put forth such BS and make it sound important. But some of the stupid rich that buy art based only on what the critics say are part of the problem as well. .... I'll just keep painting what I like painting if you just keep enjoying what you enjoy in art.

And of course Julia hit the nail on the head. Everyone's got to make a living -- con artists, artists, art critics, gas station attendants, spiritual teachers ... the lot. Somehow, everyone's got to put spaghetti on the table. I guess what I find infuriating is the immodesty and lack of giggling that seems to infuse such appreciations ... finding "meaning" and "explanation" where the heart either soars or it doesn't, where the transfusion takes or it doesn't. Which tastes better, a sip of tea or an analysis of tea-drinking? The trouble with "meaning" and explanation" is that all too often it sucks the life blood out of the art or event in question.

Open a vein and share the blood. Blood is important. Blood is life. Without blood, we'd all be reduced to some idiotic zombie show on television. I like some of Lucian Freud's paintings, but even when I don't like them, I am grateful that he sat down and opened a vein. Opening a vein takes balls. But that's just my take.

Perhaps being an art critic takes balls as well. I don't know. But I do know it can still infuriate me, plodding through life with "explanations" and "meanings," when soaring -- a real blood transfusion from Beethoven or enlightenment or a sunset or a glass of water -- is a wordless possibility.

My Zen teacher, Kyudo Nakagawa, once described the relationship between teacher and student this way (more or less): "It's like the tea in that cup between us. If you ask me what it tastes like, I can say this or I can say that. But then you take a sip. Then we both know the taste of tea."

Can anyone improve the taste of tea or the mingling of transfused blood? Can anyone talk anyone else into "great art?"

I guess it's the lack of modesty -- of pure sniggering -- that so often infuses "explanations" and "meanings" that frosts my cookies. It's as if someone threw sand in your eyes and you thought that was an adequate way of seeing, of hearing, of tasting or touching.

Well, if I keep writing, I suppose I will, if I have not already, turn into one of those art critics I claim to abhor.