At birth, Shakyamuni Buddha was said to have taken seven steps in each of the cardinal directions -- East, West, North and South -- and then, with one hand (usually right) raised to the heavens and his other pointing to the earth, he said, "Above the heavens and below the earth, I alone am the world-honored one."

From the first time I heard the line, I was captured. Who would include such a bit of mythology in their world vision? On the face of it, the line is either hopelessly egotistical or it has some other challenge in mind. I couldn't get my head around it, I couldn't get my heart around it. I was, somehow, captured with no way out.

Imagine that: "Above the heavens and below the earth, I alone am the world-honored one." 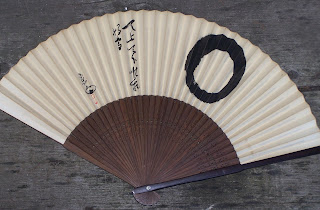 The line came to revisit with the return of a Zen teacher who had been on vacation and brought back small gifts to several of us who had cared for the zendo in his absence. We sat around a low table and showed us the gifts he had brought. I don't remember what the others were, but when I saw the fan with a reproduction of the Zen teacher Torei's calligraphy accompanied by an enso or circle (another piece of spiritual bubblegum in my mind) ... I really wanted that fan. The Zen teacher decided to do a sort of lottery -- putting the presents out of sight and then asking each of us to choose a hand or something similar. I was reluctant to put something I wanted so much into a gambler's context, but there wasn't much choice. I waited as others chose. Then I chose ... and there it was, as if waiting for me, the fan with Torei's rendition of "Above the heavens and below the earth, I alone am the world-honored one."

I've kept the fan for years, using it rarely but grateful for it still. How can anyone outgrow the wonders of "Above the heavens and below the earth, I alone am the world-honored one?" What a good friend it has become ... tasty and enfolding and cooling as ever.
.
Posted by genkaku at 6:00 PM