.
With a newly-broken tooth, I trotted dutifully to the dentist yesterday afternoon. I went prepared: Usually when I have been squeezed into the schedule in the past, there is a long, languorous wait-time. So I brought my glasses, the better to read one or more of the good selection of often-left-leaning or cerebral magazines my dentist keeps on hand. And, not wishing to read anything that serious, I picked up a National Geographic and settled down in the waiting room.

When I was called very shortly after I sat down, I took the magazine with me into the dentist's chair ... being called didn't mean anyone would come around to do the actual work. But yesterday was different, so I didn't get to read the whole article about the "Staffordshire Hoard," a collection of gold artifacts dating from the late seventh century that had been discovered in 2009 in an English field. 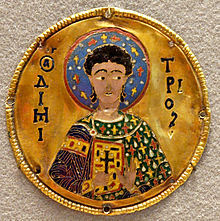 The gold's current value was guesstimated at something like $5.3 million. And that's the usual way to be astounded by treasure troves ... wow! $5.3 million discovered in a work-a-day field ... wish I could find something like that! Wish I were rich. Give me money!

But what really interested me was the magic that, in the minds of the time, outshone any material meaning:

Above all, the pieces in the hoard were forged and buried in a world in which mundane events and acts could be suffused with magic; misfortune, for instance, was commonly attributed to tiny darts fired by malicious elves, and many charms against attacks survive. The magic properties an object possessed trumped its material worth [emphasis added]. Gold was valued not only for being precious but also because, alluring and indestructible, it was infused with magic, and therefore used in amulets.

So even in the 7th century, people were hard at work, finding meanings and explanations for misfortune (those wicked elves and their darts) and fashioning beliefs and gizmos that would ward it off.  Dr. Phil had not yet been invented ... what else could a man do?

Living as I do in an age rife with the questionable reassurances of wealth -- and an age in which the elves of misfortune have not lost their savor -- I liked the idea that magic could trump material meaning. Get thee behind me, Satan!

The recognizable darts of misfortune have never and will never be laid to rest. What hovered in the 7th century hovers today. The future cannot be known, much less averted. Where's my amulet?! Where's my rabbit's foot?! Can I get Dr. Phil on speed-dial?! Fuck the gold! Bring me my magic!

But since the darts show no sign of dissolving, what does that tell me about my amulets, golden or otherwise? There is something utterly understandable about the desire to fend off the darts of misfortune. But if misfortune continues unabated, unpredictable and wily as an elf, what does that say about the explanations and meanings I have gathered in a golden hoard?

When I try to answer that question, I can hear cynicism offering a new and improved amulet. But one amulet is about like any other and cynicism is as questionable in its way as credulousness is in its. Neither has the capacity to "save" or "ward off" the darts that infuse the joys of life. It's not that magic is bad or childish ... it's just that, based on honest experience, it doesn't seem to fall into the category of what actually works. Explanations and meanings may twinkle like the Staffordshire Hoard, but the elves remain unimpressed.