.
-- The Occupy Wall Street movement, which has gained momentum nationwide since it got off the ground on Sept. 17, 2011, is coming under increasing pressure. Police department budgets are being stretched in a time when no one has as much budget as once. 'Health' issues are being raised. And it's not just propaganda flag-wavers like Fox news. Staid and vaguely sympathetic organizations like the Associated Press are saying between the lines, "OK, kiddies, you've had your say. Now get back in the box."

In which regard, a friend sent along this picture, which seems to wrap up the Occupy case: 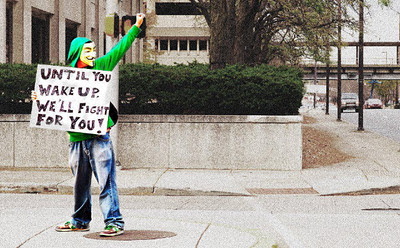 -- In a comprehensible tragedy that allows tragedy to enter the mind, three people died when a suspension bridge in Borneo collapsed. The killings in Pakistan, Afghanistan, the Middle East and elsewhere are numbingly disposable in their endlessness. But three people in a place almost no one could find on a map? It really is terrible.

-- Italy's interest rates have gone up in a time when poverty rears its head. At the same time, Standard & Poors, the rating agency that contributed handsomely to the 2008 economic debacle, downgraded the credit-worthiness of Belgium. Strange how what was once discredited as a reliable credit rating agency is now back in business, much as the bankers and stock agencies that likewise contributed to the latest Depression are back in the money-making pink (courtesy of the taxpaying public) and hollering that they are being unfairly targeted for responsibility or corruption.

-- And in Cambodia, some of the men accused of being hip-deep in the killing of close to two million  people from 1975 to 1979 are defending themselves: "We had our orders." Who can remember 1975? The Vaseline of time blurs the camera lens ... as it does, like it or not, for the Jews, gypsies, homosexuals, Catholics and others that Hitler found distasteful. And for the Ottoman slaughter of about a million Armenians ... and Stalin's systematic starvation of Ukrainians ... and... and...and ... the lens is blurred.
.
Posted by genkaku at 9:21 AM