There. I said it.

Both arms looked a bit as if I had taken up residence in some dripping alley-way, accompanied by other lads and lasses who had found a medicinal way to stay alive or do whatever they do down drippy alley-ways ... bruised and battered and surrounded by yet one more caring attendant searching for a place to slip in yet another bit of improvement ... "just a little pinch."

Day by day passed. The hellishly-tan walls, the ones that lacked even a bit of hotel-and-motel art, seemed relaxed and smug: "You're sick," they whispered with assurance and "we're here to take care of you." The attendants, like the walls, were ever so nice.

The drugs fucked with my mind. Like the elderly warehoused in old-age homes, mind and body sank lower and lower into the comfort of circumstances. The one bit of dignity that went un-offered was the obvious means to commit suicide. The window looking out on the hospital parking-lot and evergreens was three stories up ... but was locked tight against the wiles of Harry Houdini. A man or woman who is not offered the right to do what is rightfully his or hers is surrounded by poseurs.

Eventually, I got out, got home, got to a place where the mess made a remembered sense, even if things have become less cranky. Not much has changed ... sort of. The Christians still believe. Zennies too. Hamas and Israel pretend they want peace without making serious sacrifices that would actually assure such a peace ... i.e. war is so much easier to bemoan than peace is to assure. I wanted to write and couldn't find much to write about. Dick Cheney and his insurgent Middle Eastern pals still think they should/could/would run the world. "Meaning" is still meaningful if you insist.

I suppose I could do the "organ recital" and laundry list the ailments, but if I honestly found that interesting, I would have become a doctor. Bureaucracy is not my favorite sport.

The sky is mottled today.

There are pictures on the wall.

And my mind is still a mess. 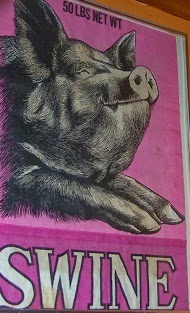